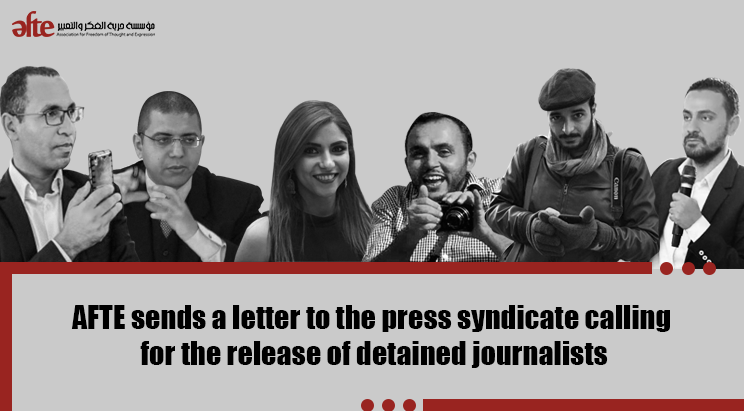 Mr. Diaa Rashwan – The head of the council of Journalists’ syndicate/

And Members of the Board of the Journalists’ Syndicate

Sender: The Association for Freedom of Thought and Expression (AFTE), an Egyptian institution that deals with the conditions of freedom of the press and the media and the rights of professionals working in that field, as well as AFTE’s work on files and issues related to the right to freedom of expression.

Subject: The efforts of the Syndicate of Journalists regarding the release of imprisoned journalists must include more cases to close this file.

AFTE appreciates the efforts of the Journalists’ Syndicate Council, led by the journalist and head of the General Information Authority, Diaa Rashwan, in the so-called File (Imprisoned Journalists), as the serious interventions of the syndicate with the relevant authorities has led to releasing some journalists during the year of 2020.

The Syndicate Council intervened to stop the abuse of journalist and editor-in-chief of “Masr Alarabia -The Arabian Egypt” website Adel Sabri after being remanded in custody for two years on two cases in which he faced the same malicious accusations against journalists, including spreading false news and joining a banned group. The Journalists’ Syndicate Council also intervened to release journalists Aouni Nafi, Sameh Hanin and Basma Mustafa, as well as to mediate the release of photojournalist Mohamed Al-Ra’i.

As important as these steps are, they should be doubled to include other journalists imprisoned in Egypt for their journalistic work. AFTE sets out its list of imprisoned journalists before the Journalists’ Syndicate President and the Council, and in this letter reviews the most prominent cases of imprisonment of journalists, with the aim of encouraging the syndicate’s efforts to release and close this file, in order to ensure the protection of press freedom.

AFTE would like to point out some cases, which it hopes will be a priority for the work of the Journalists’ Syndicate’s head and its Council in the coming period, most notably journalist Solafa Magdy and her husband, photojournalist Hossam Al-Sayed. On November 27, 2019, security forces arrested them with the writer Mohamed Salah, and since then, they have been renewed in connection with case 488 of 2019. The couple, Magdy and Al-Sayed, have a six-year-old son, who is being deprived of their care, as they are in pretrial detention. The Public Prosecutor’s Office did not respond to the request for the release of one of the spouses, taking into account this exceptional situation.

This year also witnessed the arrest of publisher and journalist Mustafa Saqr, in April, where the State Security Prosecution charged him, most notably joining a terrorist group, and renewed his detention since then pending investigation in case 1530 restricting state security.

The case of journalist Ismail Al-Iskandrani remains one of the most difficult, as he has been detained since November 2015, when he was charged by the State Security Prosecutor’s Office with belonging to a banned group founded in violation of the law, promoting its ideas, and broadcasting false news and statements about the situation in sinai. He spent two and a half years in pretrial detention. The military court then sentenced Al-Iskandarani to 10 years in prison on May 22, 2018, and the verdict was confirmed on December 27th. The case was recorded at no. 18 of 2018 military crimes north of Cairo.

Accordingly, AFTE invites the head of journalists’ syndicate and members of the Council of the Syndicate to examine these cases, as well as journalists on the association’s list of imprisoned journalists, and to communicate with the relevant authorities for their release.

Attached to you the list of the imprisoned journalists.

And please accept our sincere greetings,