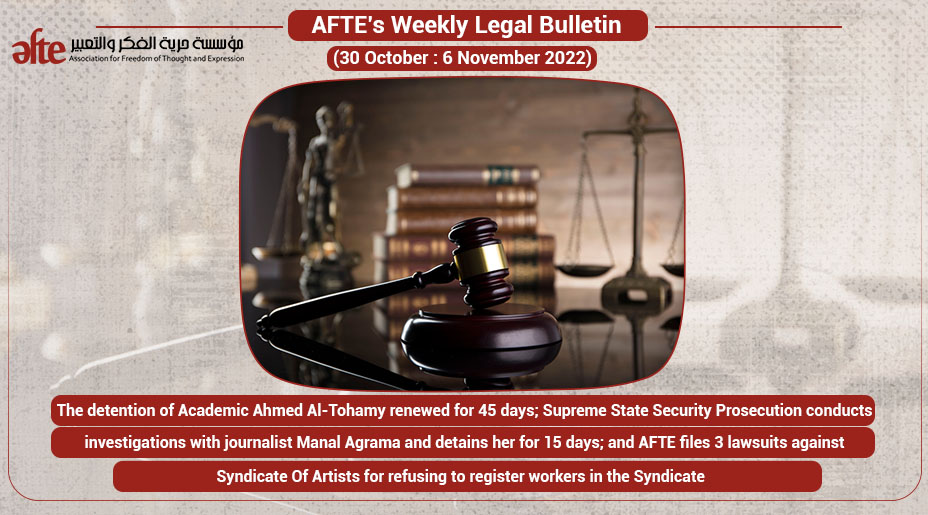 AFTE’s weekly legal bulletin (30 October: 6 November 2022) | The detention of Academic Ahmed Al-Tohamy renewed for 45 days; Supreme State Security Prosecution conducts investigations with journalist Manal Agrama and detains her for 15 days; and AFTE files 3 lawsuits against Syndicate Of Artists for refusing to register workers in the Syndicate

On November 3, the Supreme State Security Prosecution begun its investigations with lawyer and former deputy deputy editor-in-chief of the Radio and Television Magazine, Manal Agrama, in connection with Case No. 1893 of 2020 (State Security), and decided to detain her for 15 days, Agrama was transported to al-Qanater prison for women after the interrogation session. AFTE’s lawyer in cooperation with “defense law firm”.

On October 30, the Criminal Court (3rd Terrorism Circuit) renewed the detention of the assistant professor of political science at the Faculty of Economic Studies and Political Science at Alexandria University, Ahmed Al-Tohamy Abdel Hay, for 45 days in connection with Case No. 649 of 2020 (Supreme State Security).

A security force arrested Al-Tohamy on June 3, 2020, He remained under enforced disappearance for 17 days at the Cairo National Security headquarters until he was brought before the Public Prosecution Office on June 20, against accusations of collaborating with the Egyptian activist Mohamed Sultan, who is residing in the United States, in the case Sultan filed against the former Prime Minister Hazem Al-Beblawy, which AlTohamy has denied before the investigating authorities.

Al-Tohamy suffered from poor detention conditions for seven months, as he was held in a cell with 30 other inmates, he was banned from outdoor exercise and visits.

On November the 1st, AFTE filed three appeals before the Administrative Judiciary Court that carried numbers 7551, 7553, and 7556 of 77 Judicial year, on behalf of Sheren Fathy Hussin, Amr Abdel Halim, and Ahmed Shoaib Abdullah.

AFTE filed the appeals against the head of the Syndicate Of Artists in his capacity, against negative decision to refrain from registering them in the Syndicate, despite fulfilling all the conditions that qualify them to obtain the Syndicate membership, as well as the Syndicate’s refusal to review their applications or to clarify any reasons for refusal.

AFTE requested the Administrative Judiciary Court to urgently set a date to examine the appeals and to halt the appealed decision and its consequences.