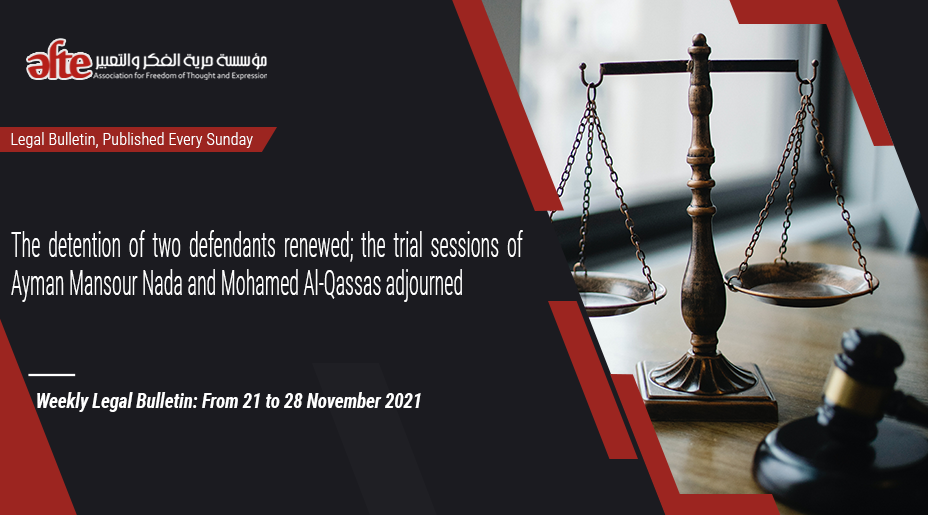 The Criminal Court (The Council Chamber) on 21 November renewed the detention of lawyer Amr Nohan for 45 days in connection with Case No. 741 of 2019 (Supreme State Security Prosecution).

Nohan faces charges of joining a terrorist group and spreading false news. He hasn’t been released yet, although he exceeded the maximum pretrial detention limit in the same case under the Criminal Procedures Law.

The Criminal Court (The Council Chamber) on 22 November renewed the detention of lawyer Mohamed Ramdan for 45 days in connection with Case No. 910 of 2021 (Supreme State Security). This came after the court adjourned Ramdan’s trial four times as it wasn’t possible to transfer him from his prison cell to the court.

Ramadan is facing charges of joining a terrorist group. He suffers from a coronary artery disease, high blood pressure, and persistent pain in the knees. The current case is the third in which Ramadan is accused.

Ramadan was arrested in Alexandria on 10 December 2018 after he posted a photo of himself on Facebook featuring him wearing a yellow vest in solidarity with the “Yellow Vest” protests in France at the time.

The South Cairo Criminal Court (Circuit 27 Criminal) decided on 22 November to adjourn to 27 December the trial of Ayman Mansour Nada, the head of the radio and television department at Cairo University’s Faculty of Mass Communication, in order to review the defense panel’s requests.

Nada is being tried in connection with Case No. 9840 of 2021 on charges of publicly and maliciously publishing false news about Egyptian media that would disturb public peace and harm the public interest. He also faces charges of insulting the Supreme Council for Media Regulation (SCMR) and the National Press Authority by describing them as tyrants and insulting the SCMR’s head and members as well as the director of the media syndicate.

These charges date back to posts on a Facebook account attributed to Nada that criticized the SCMR and some media outlets.

Nada’s defense panel submitted several requests to the court, including:

1- A request for the SCMR to present a certificate or a statement on the number of committees or positions occupied by SCMR member Ms. Rania Metwally Hashem, and a statement of the salaries, allowances, and financial incentives she received in 2020.

2- A request to provide a certificate or a statement of what Hashem obtained from Extra News Channel, the nature of her work in the channel, and the total amount of salaries, financial incentives, and allowances she received in 2020.

3- A request for Al-Akhbar Foundation and Rose Al-Youssef to submit a statement on the incentives, allowances, rewards, and others that Mr. Karam Gabr received.

4- A request for the SCMR to present a statement on Al-Seha Wal Gamal, Al-Hadath Al-Youm, and Al-Bait Baytak TV channels, as well as the programs and presenters of these channels during 2020.

5- A request to assign an expert from the National Telecom Regulatory Authority to examine the Facebook account attributed to Nada, as defects were spotted in the existing report.

The Criminal Court approved the first and second requests only. The SCMR’s lawyer, meanwhile, demanded a temporary civil claim of EGP 100,001 until the court decides on the case.

On 24 November, the Criminal Court (Circuit 3 Terrorism) decided to adjourn to 28 December the trial of Mohamed Al-Qassas in connection with Case No. 1059 of 2021 (the 5th Settlement Emergency State Security Felonies) so that the defense panel can review the lawsuit papers.

Al-Qassas faces charges of joining a terrorist group with knowledge of its goals. He has been rotated into other cases since his arrest in February 2017.

On 24 November, the Administrative Judicial Court (Circuit 17) decided to refer a lawsuit filed by AFTE to the first circuit of the same court. AFTE’s lawsuit challenged decision No. 2185 of 2014 regarding the formation of an ad hoc committee to nominate university presidents and deans of colleges and institutes, regulate their work and the procedures and conditions for candidacy, as well as the subsequent decisions and the consequences thereof.

The case is based on a decision issued by the President of the Republic under law No. 52 of 2014 amending specific provisions of the law on the regulation of universities. Under the decision, the President is entitled to appoint presidents of universities and deans of colleges and institutes based on the nominations of a specialized committee.

The decision referred the formation of this committee to a decision to be issued by the Minister of Higher Education. Thus, the Minister of Higher Education issued decision No. 2185 of 2014, which determined the committee’s framework, jurisdiction, the terms and qualifications for candidacy, and the selection of candidates for the positions of university presidents and deans of colleges and institutes. This led the executive authorities to interfere in the process of selecting university presidents after they used to be elected by members of the academic community.

AFTE calls for halting the appealed decision in preparation for its revocation, stopping examination of the lawsuit, and referring it to the Supreme Constitutional Court to declare the abovementioned decision No. 52 of 2014 unconstitutional. This decision, moreover, undermines the independence of universities and academic freedom.