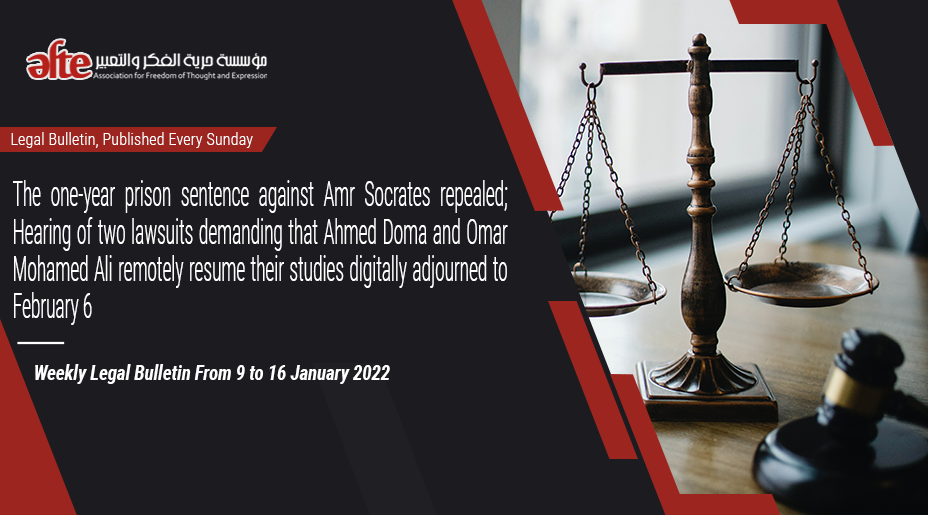 The decision of renewing Abdel Rahman’s detention comes in connection with Case No. 3418 of 2020 (State Security Emergency Misdemeanour), in which Abdel-Rahman is charged with several accusations, most notably joining the terrorist group ISIS, Adapting and promoting Takfiri ideas.

While integrating, Abdel-Rahman denied all charges against him after his arrest on August 22, 2020, from his house, against the backdrop of expressing his Qurani religious beliefs.

On January 9, Zagazig Misdemeanors Court of Appeal decided to accept the appeal filed by the defense of Amr Mohamed Mostafa, known as Amr Socrates, to repeal the one-year prison sentence against him, and to acquit him.

Last December 27, Belbis Misdemeanors court sentenced Socrates to one year in prison, in connection with Case No. 24382 of 2021 (Belbis Misdemeanors), against the charge of possessing publications that promote a terrorist group’s ideas.

Security forces arrested Socrates – for the second time-  on November 6, while filing his recruitment papers; later on, after three days, he appeared before the South Zagazig Prosecution, against the backdrop of charges of joining a terrorist group and possessing publications that promote its ideas.

On January 9, The Administrative Judiciary Court (The Sixth Circuit) decided to adjourn the hearing session of the two lawsuits filed by AFTE on behalf of Ahmed Doma and Omar Mohamed Ali, challenging the negative decision not to allow them to resume their studies online, against both the Minister of Higher Education and the Minister of Interior in their capacity, to next February 6 session, for the administrative body’s response and document submission.

In the two lawsuits, ِAFTE demanded to allow Doma and Ali to resume their studies by attending lectures online through the Prison Authority Sector’s digitally equipped halls inside prisons to hold detention renewal sessions after both Doma and Ali submitted several requests to allow them to resume their exams and digital lectures, but the prison administrative authority declined without giving reasons.

On January 10, the State Commissioners Authority (The 17th Circuit) decided to adjourn the appeal filed by AFTE and ANHRI on behalf of Dr. Manar Al-Tantawy to the next February 21 session, to obtain an official copy of the reasons for refusing to grant her professorship.

The appeal held No. 61520 of 75 was filed against both The Minister of Higher Education and the Dean of the Higher Technological Institute in the 10th of Ramadan City, challenging the negative decision not to grant Al-Tantawi the professorship despite fulfilling all the technical and procedural conditions.

The events date back to her request as she asked for her legal right to chair the Mechanical Engineering Department and the consequent material and moral rights as being the most senior assistant professor within the department. Nevertheless, her request was rejected by the Dean of the Institute considering being the wife of the former prisoner of conscience and journalist Hisham Jaafar, even though she previously had assumed the position and abdicated temporarily due to her health conditions last year.