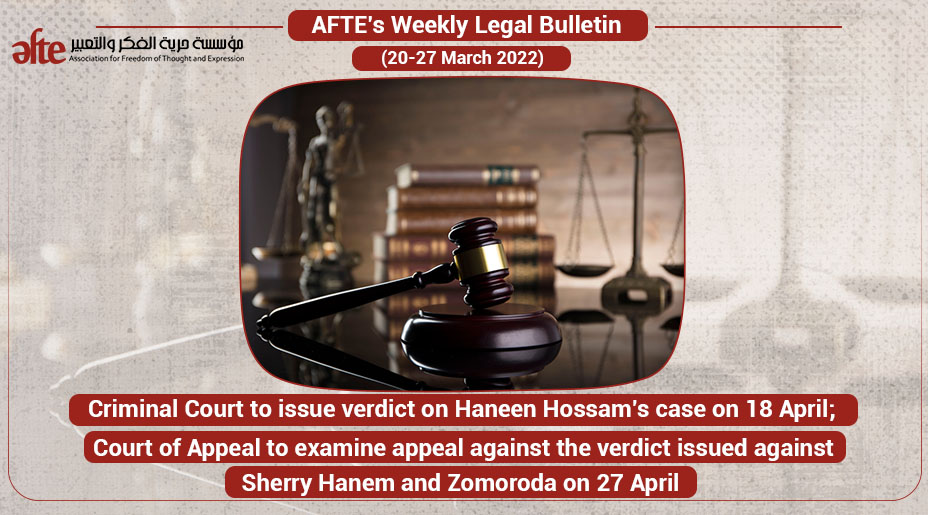 Criminal Court to issue verdict on Haneen Hossam’s case on 18 April; Court of Appeal to examine appeal against the verdict issued against Sherry Hanem and Zomoroda on 27 April

Hossam, a 20-year-old second-grade student at Cairo University’s Faculty of Archeology, is retried against the backdrop of the verdict issued earlier against her in absentia. On 21 June, the Cairo Criminal Court sentenced her to 10 years in prison and ordered her to pay a fine of 200,000 pounds, on charges of human trafficking and commercial exploitation of children. The prosecution levelled these charges against Hossam after she posted a video in which she called on girls over 18 to use the Likee app to create an entertainment content and gain financial benefit in return.

In the last hearing, Hossam’s defense presented several pleads before the Criminal Court, most notably inadmissibility of rehearing the case due to the previous adjudication in Case 246 of 2020 (Cairo Economic Misdemeanor), which is known as the case of demolishing family values, in which the Cairo Economic Court had previously acquitted Hossam of the charges levelled against her.

On 22 March, the Court of Appeal set 27 April as a date to examine appeal No. 14705 of 12, filed by AFTE and Ahmed Ragheb for Law and Legal Consultations on behalf of Sherifa Refaat Abdel Moteleb, known as Sherry Hanem, and her daughter Nora Hesham Ahmed, known as Zomoroda. The appeal will be examined before Circuit 15 of the Court of Appeal.

The appeal was filed last August against the verdict issued by the Cairo Economic Court against Sherry Hanem and Zomoroda that sentenced them to five years in prison and ordered them to pay a fine of 100,000 pounds each for posting videos on TikTok, in connection with Case No. 730 of 2020 (Misdemeanor, Appeal), registered under No. 535 of 2020 (Misdemeanor, Economic).

Sherry and Zomoroda were arrested on 11 June 2021. The Public Prosecution charged them with infringing on family values and principles, violating privacy, and posting indecent pictures and videos with the purpose of distribution and display. It also charged one of them with soliciting prostitution and the other with assisting her and creating personal accounts on the internet with the aim of committing these crimes.

Earlier this month, AFTE issued a statement calling on President Sisi to issue a presidential pardon for female TikTok content creators who have been prosecuted over the past two years for posting videos.

Security forces arrested Elsayed on 5 December 2021. Ten days later, he appeared before North Sharqiah Prosecution in connection with the first case No. 15145 of 2021 (Kafr Saqr Misdemeanor). Later, the prosecution referred him to Kafr Saqr Misdemeanor Court on charges of joining a terrorist group and possessing publications that promote its ideas. On 17 January, the court acquitted him, but instead of releasing him the prosecution recycled him into another case on the same previous charges.