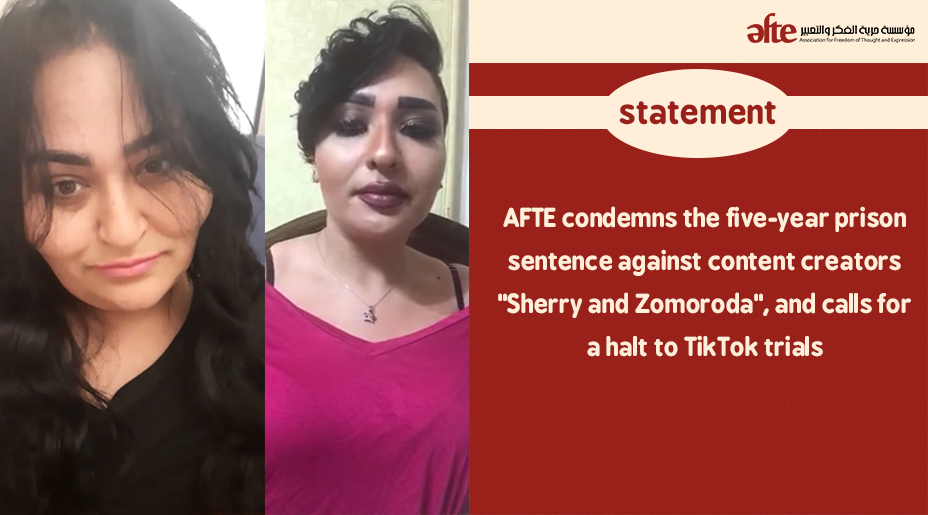 The Association for Freedom of Thought and Expression (AFTE) condemns a court decision to sentence TikTok content creators Sherifa Refaat (aka Sherry Hanem) and her daughter Nora Hesham (aka Zomoroda) to five years in prison on charges of infringing on family values and promoting prostitution.

The decision was issued on 13 June by an appeals circuit at the Cairo Economic Court, which also fined them LE100,000 each, in a lawsuit filed by lawyer Ashraf Farahat, the founder of the so-called “Purification of Egypt Campaign”.

AFTE also calls on the judicial authorities to stop prosecution of women for posting content on the internet.

A police force arrested Sherry and Zomoroda from their home in Cairo’s Heliopolis in June 2020, based on a warrant issued by the Public Prosecution. The arrests were part of a campaign that targeted female content creators on the grounds of protecting what the prosecution called “Egypt’s cyber borders” from threats of deviation from society values and principles. The prosecution charged Sherry and Zomoroda with violating family values ​​and principles, posting indecent pictures and videos with the purpose of distribution and display, practicing and inciting prostitution, and creating electronic accounts with the aim of committing crimes.

On 29 July 2020, the Public Prosecution referred the two ladies to the Cairo Economic Misdemeanour Court, which at the end of September of the same year sentenced them to 6 years in prison, ordered each to pay a fine of LE100,000, and placed them under police monitoring for 3 years. The two women are active on a number of social media platforms, most notably TikTok and YouTube, where they provided satirical content that received nearly 7 million likes on various platforms.

In the same context, the Cairo Economic Misdemeanour Court on 8 June sentenced content creator Mennatallah Emad (aka Renad Emad) to 3 years in prison and fined her LE100,000 in the presence of her lawyer. Emad is active on TikTok and Instagram, where she provides dancing videos and is followed by more than three million users.

During 2020 and 2021, the prosecution referred 12 defendants to trial for posting content on TikTok and Likee apps. They include 8 female content creators, a page admin, and three Likee employees. Seven of them are still in detention, with four pending trial and three serving jail terms issued against them earlier. The three who are serving jail terms include Sherry and Zomorda whose prison sentences were upheld, and Manar Sami who was sentenced in absentia. Meanwhile, Renad Emad was sentenced in the presence of her lawyer, but we have not been able to confirm whether or not she was arrested so far. Security services are still tracking Haneen Hossam, who the court ordered to be arrested on human trafficking charges.

These trials reflect the Egyptian authorities’ hostile attitude towards the internet and their attempt to impose guardianship over the content provided by individuals, especially women, by imposing a set of prohibitions, taking advantage of the loose provisions of the Law on Combating Information Technology Crimes No. 175 of 2018, especially Article 25 which introduced imprisonment for publishing content online under the pretext of violating family values ​​and principles, something which AFTE warned against earlier when the law was passed. The approach of the judicial authorities is entirely in line with the government policies aimed at imposing more restrictions on online users to close the last available window of expression for Egyptians.

AFTE renews its call for the judicial authorities to review these rulings, release the detainees immediately, and stop the prosecutions of online users. It also calls on the House of Representatives to repeal the Law on Combating Information Technology Crimes No. 175 of 2018, which violates the Egyptian constitution and is used as a pretext to censor the internet and impose guardianship over its content.