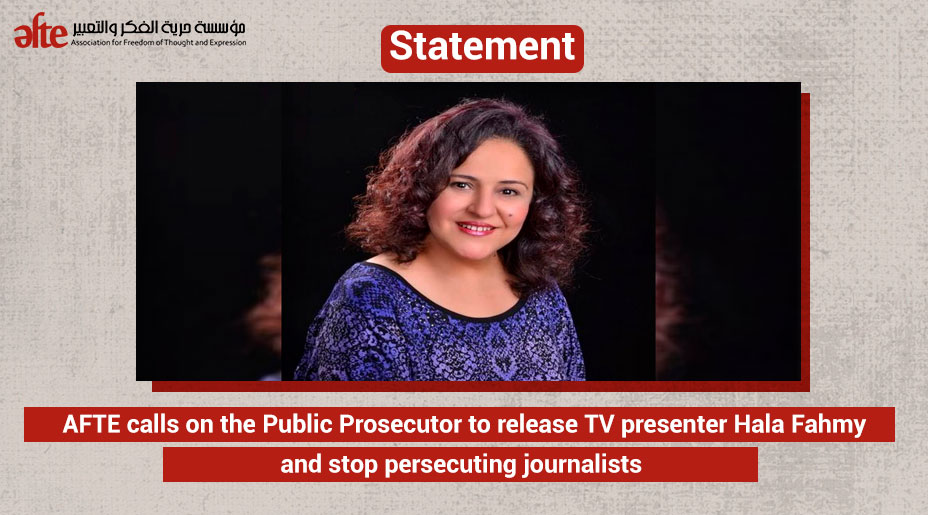 The Association for Freedom of Thought and Expression (AFTE) calls on Public Prosecutor Hamada El-Sawy to immediately and unconditionally release Egyptian TV presenter Hala Fahmy, close investigations with her, stop all forms of abuse she is subjected to, and hold everyone involved in that abuse accountable. The National Media Authority (NMA) should ensure that Fahmy returns to her job without harassment or abuse.

The detention of Fahmy is a flagrant violation of the right to freedom of the press and media, as well as the right of public servants to freedom of expression. These rights are expressly guaranteed by the Egyptian constitution and stipulated in international treaties signed by Egypt. The incident reveals the continuation of security practices that violate the constitution in a blatant and unchecked manner, especially with the continued impunity of the perpetrators of these violations.

The detention of Fahmy had a number of milestones that reflect tracking, prosecution, and security and professional surveillance, as well as intimidation and illegal arrest. On 28 February 2022, Fahmy and her colleague director Wafaa Barakat were banned from entering their workplace at the radio and television building (Maspero), as per a decision issued by the NMA on 17 February 2022 to refer Fahmy to investigation based on a memorandum submitted by the head of the television sector. The NMA also decided to suspend her from work for three months, with only half of her salary paid, and to prevent her from entering the Maspero building until investigations were completed.

Fahmy said she was not notified of the NMA’s decision through any official or unofficial means. So, the decision came against the backdrop of her support for and participation in Maspero staff protests that demanded improving employment conditions, specifically the payment of arrears for employees and pensioners. Fahmy previously held a sit-in at the office of the head of Channel Two, with the aim of encouraging her colleagues to continue demanding their rights and not to give them up, according to her.

Meanwhile, an AFTE lawyer said the prosecution faced Fahmy with a number of exhibits, including screengrabs of posts from her Facebook page, as well as official statements from the Central Bank of Egypt and the Cabinet Information Center that denied some of the information contained in Fahmy’s posts.

Despite the administrative measures taken against Fahmy, she remained under prosecution until her arrest. She posted a video on Facebook last April, while she was outside the Nozha police station, in which she said she was being pursued by unknown people and that she sought help from the security forces at the police station. Also, plain-clothes security men stormed Fahmy’s house and searched it, but she was not there. After that, all contacts with Fahmy were cut off after her phone was turned off for two days. She was arrested on 24 April 2022 and appeared before the Supreme State Security Prosecution on the same day without the presence of a lawyer.

Fahmy’s arrest was preceded by the arrest of Safaa Al-Korbigi, a journalist working for the radio and television magazine, who is held in pretrial detention in connection with the same case No. 441 of 2022 (Supreme State Security), which does not include others.

The security force that arrested Fahmy had confiscated the key of her apartment, three mobile phones, and a sum of 12,000 pounds. Neither Fahmy nor her defence panel know until this moment whether this was proven in the seizure report or not.

Treating Fahmy badly inside the prison, keeping her at the new inmates ward, and depriving her of the right to read, exercise, and communicate with others violate the prison regulations and represent a further abuse against her. Fahmy decided to go on a hunger strike until her conditions of detention are improved.

AFTE stresses that the investigations with Fahmy have been almost completed. According to an AFTE lawyer, the case can now be referred to a competent court. Therefore, AFTE calls on the Public Prosecutor and Diaa Rashwan, in his capacity as head of the Journalists Syndicate and the general coordinator of the national dialogue, to intervene quickly to bring Fahmy’s case to an end, either by releasing her immediately or referring the case to the court, for fear that she – like other prisoners of conscience – will be held in pretrial detention for a long time or recycled into another case.